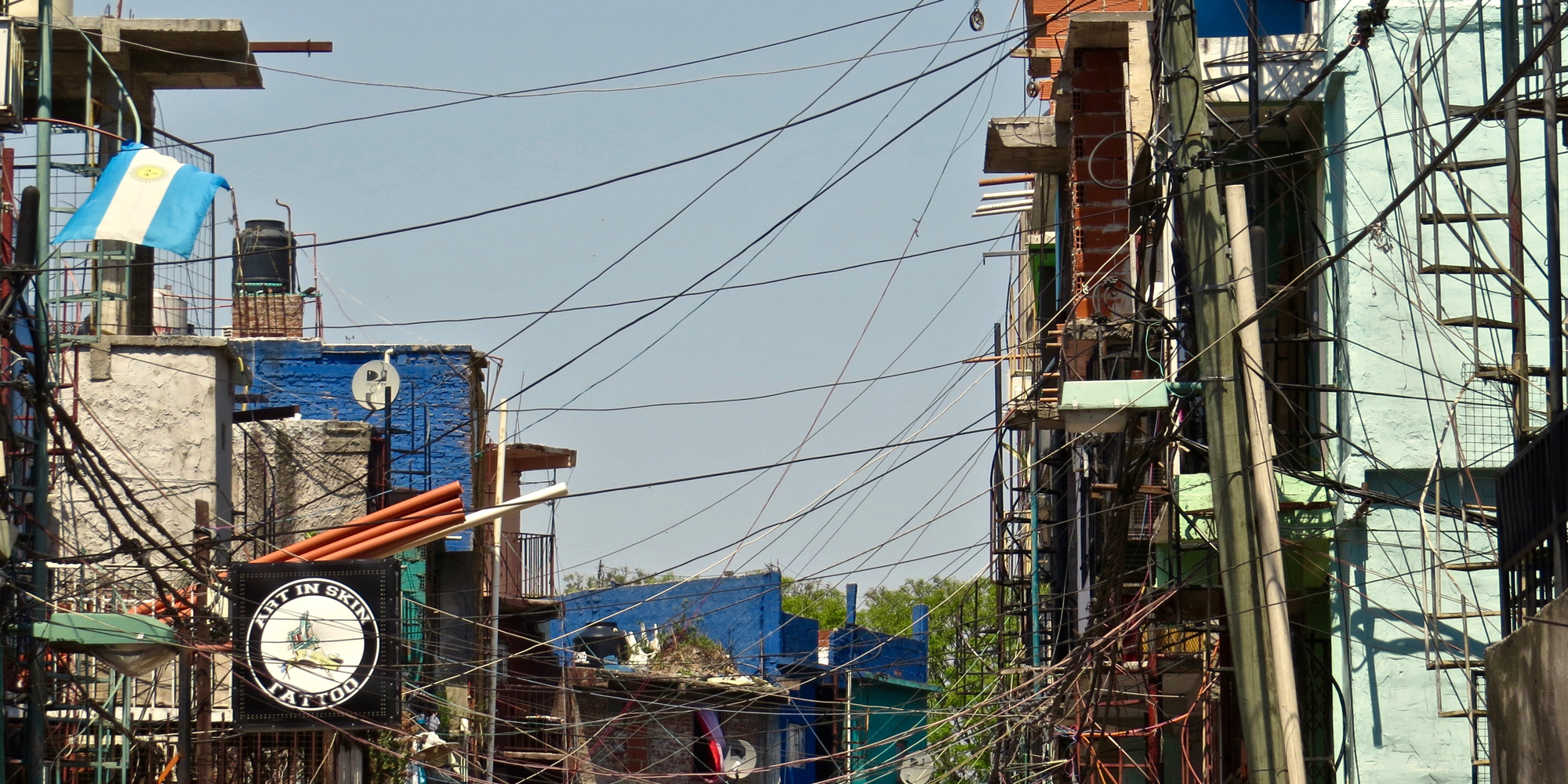 Report of a ‘field trip’ to Villa 31, a shantytown in the center of Buenos Aires, currently aim of an urbanization project.

Sky cut into pieces by wires.

Structures of bricks and concrete, with or without paint in different colors.

Floors stacked on top of one other like toy blocks, not perfectly aligned, not all entirely the same size.

Stairs attached to the outside of walls, like New York City’s fire escapes. Here, itself a source of danger.

Behind the mosaics of wires, metal and facades: homes.

A vertical horizon with part of a shiny skyline, reminding you that this is one of the most desirable locations of Buenos Aires, due to its centrality.

Streets in all shapes and sizes, very much unlike the rigidness of the rest of the city.

Narrow alleys that in other places would be the ‘old city center’, in a city without a ‘traditional.’ It is new, just ‘auto-constructed.’

Built by the hands of those fallen into misery after yet another economic crisis, often having left their countryside or country in search of a better life. (Sadly, they might even have found it.)

Faces from elsewhere, yet often never having known another place. Faces of generations – the first constructions on this site date back to the 1930s, after the worldwide depression left many immigrants, at that time from Europe, without a job.

Right now the number of inhabitants is about 40,000; half of them from Paraguay, Bolivia and Peru. After attempts and promises to evacuate the area, it is now aim of an urbanization project, which has upgraded it to the fanciest slum in town.

“This is a VIP shantytown,” said one who had visited India.

Football fields, playgrounds, a square with hints of green – one might even call it a park.

Surfaces of peeling paint bedecked with strings of laundry.

Small children waddling around, older ones playing with balls, climbing up and down the stairs as if play equipment.

“I had never been this afraid,” said another, reminiscing his nightly drunken Google Maps failure that had led him through the shantytown.

From above, a view on the contrasts, divided by departing and arriving trains. The mirroring glass buildings symbolize the impenetrable world on the other side of the tracks.

A covered market place, bustling and noisy. Until you see that the roof is a highway.

“I love it! It’s like Mexico!” exclaimed yet another, who I knew had been put off by Buenos Aires’ lack of Latin American lively street food culture.

The streets of Buenos Aires are – not unlike many urban areas – filled with people on their way from one building to another. But in this part of the city, space outside seems to have an intrinsic value. What that says about their insides and lack of need for commuting, I could only guess.

2 Chronicles 7:14 painted on a wall. Posters of Machu Picchu.

Banners advertising an orthodontic clinic. A man with a collar, buttons and a briefcase. Shiny motorcycles.

But the most curious thing of all was a group of twenty young foreigners navigating through the maze like a bandoneon, trying to avoid rubble, mud and any behavior that might suggest voyeurism. We were on a ‘field trip.’

The sun beating down reflected in our sunglasses, which materialized the distance between us and them.

I pretended to pay no particular attention to the inhabitants as though they were nothing remarkable – just people. Every person is worthy of being ignored. We only shared in the intangible shame that was silently floating between us.

“What do you think?” I asked my classmates, postponing putting my own impressions into words just yet. Expectations induced by the severity of the warnings we had received before we started our tour seemed to make for mitigating answers. We had been prepared for worse.

Most-heard adjective: interesting. Undecided about their opinion: many. Impressed by the contrast with the city as we had known it until now: all of us.

When trying to recall their answers: that I had been listening more to my own thoughts.

Well-intentioned advices and an obligatory insurance in the back of my mind were worrying rather than comforting and made me look around cautiously; suspiciously. It was a weird sense of unconfirmed fear; of a place a traveler would normally indulge in.

These sentiments alternated with contemplations of the embarrassment I felt about how much the orientalist in me enjoyed the photogenic misfortune and how much I wanted to take pictures of every detail I saw.

Our guides’ explanations of the urbanization project transformed the lives lived here into a ‘situation’; an unacceptable condition people were going to be elevated from. The pipes we watched being dug into streets legitimized our visit.

I wasn’t sure how to approach this place in a way that was not denigrating to many others in the world for whom similar standards (and worse) are not a ‘situation’, with perspectives of change, but a ‘life’. But not pitying them would be equally condescending.

Notwithstanding the certain influence we had on our surroundings, our presence in the shantytown probably had a more profound impact on us than on our objects of observation, for whom we were not the first visitors. The ‘participants’ were us.

Describing any impressions of such a brief moment is per definition more about our own experience than it can be an accurate account of the reality we were asked to report about. The trip was enriching to me personally and it had never really occurred to me that such things I normally do to lessen my traveler’s thirst for the culturally exotic could be justified as a scientific exercise. That seemed both a response and a challenge to the ethical question.

‘Field notes’ as a description of what it is like to experience an unfamiliar environment for someone living in a university. A depiction of a glimpse of someone else’s everyday. In the name of knowledge.