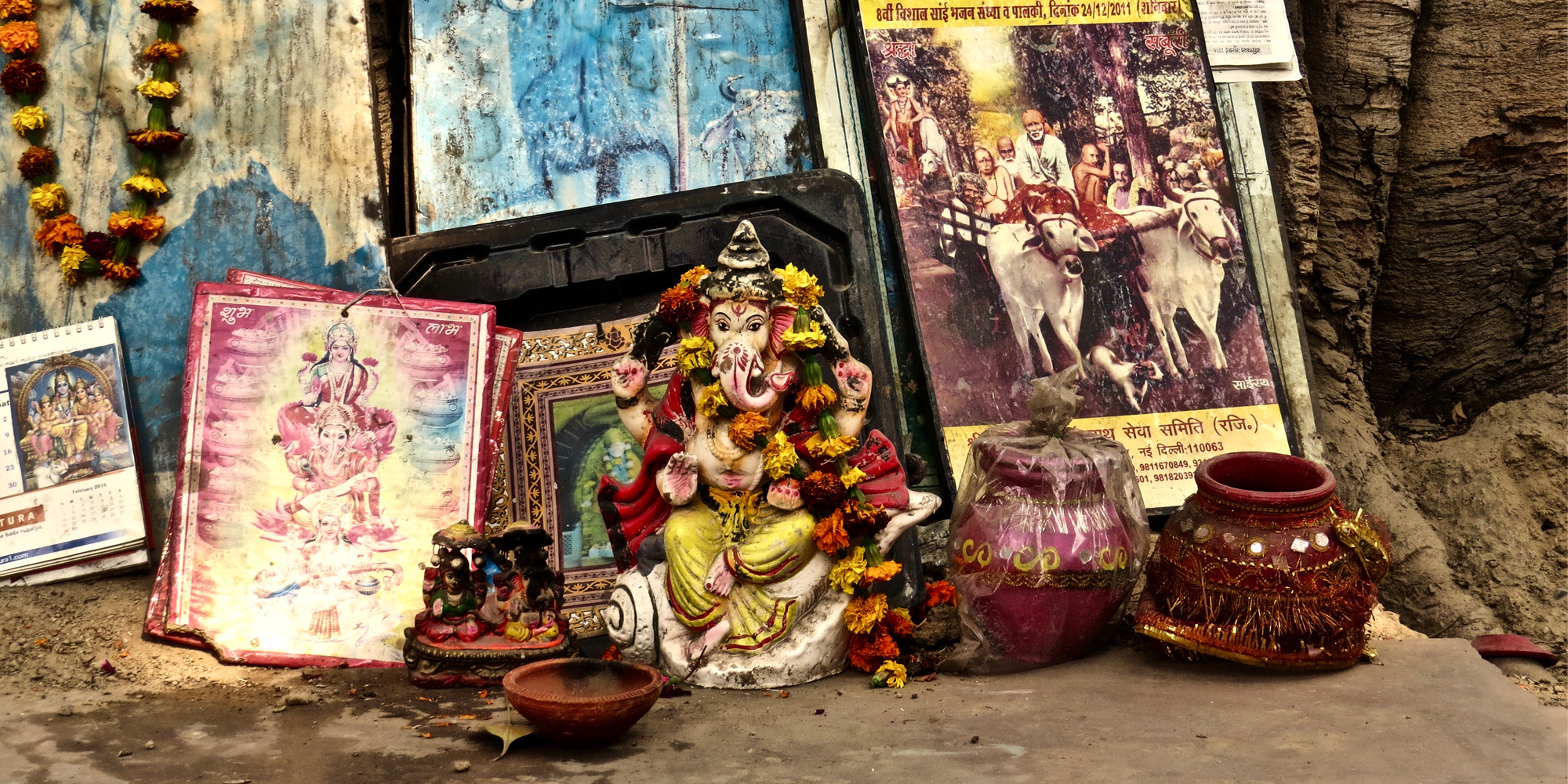 On my second day in India, I almost teared up in the back of a tuk-tuk that was driving me past houses of cardboard and rags. I was slightly surprised by and appreciative of my own sensitivity: it was not the first time I was confronted with poverty, so I was no stranger to the view of dirty faces over asking hand palms, nor was I unpracticed in looking away.

Often clumsily paralyzed in the face of so much misery, it eases the conscience to justify your passivity by reminding yourself that for every coin or candy one person will multiply by ten and form an instant fanbase that will follow every step you take. Stories of bad guys forcing children to beg and confiscating what they collect are always received with appropriate disgust, but also thankfully welcomed, because it excuses one from difficult ethical questions that seem to well up from full stomachs and wallets.

Beggars scratch the shiny layer of our self-image as a good person. They give you a flimsy hint of what it is like to have sorrows as they force you to choose between helping or feeling bad about yourself, because you do realize that it is disgustingly selfish indeed not to spare a minuscule piece of your comparatively vast wealth. Hands are raised a little higher for white faces. Which stereotype do you not want to confirm, the one of the affluent, the egocentric or the condescending white?

The feeling of guilt is something most European and American travelers in India know all too well: Christian sin and colonial history made it the West’s default setting, catalyzed by Edward Said’s Orientalism. The self-proclaimed Antichrist, Friedrich Nietzsche, calls Christianity the religion of pity (Mitleiden); according to him one of the most destructive human emotions: a glorification of weakness and thereby hostile to life. Jesus, himself a poor man, said that God has a special love and regard for those living in poverty1 – diverging from the idea (embraced in the Jewish tradition2) that it is the wealthy who are blessed by God.

The Church has in European societies long stood at the forefront of taking care of the poor, accompanied by public and private institutions, however to a greater extent in the north than in the more family-oriented Mediterranean. Beggars, who depend on almsgivers in the street, are today, in my experience, relatively well off even farther south. Islam is traditionally less institutionalized than Christianity and individual charity is thus more important: Muslims have the religious obligation to give a percentage of their income to the poor, called the zakat.3 Rather than by institutions, Islam regulates emotions of love and compassion through law.4 In Islam, prayers are made with unfolded hands – as a symbol, the open hand palm stands throughout the Middle East for protection; as a gesture in the street, it receives that.5

Hinduism, the religious orientation (in one way or another) of about 80% of India’s population, is a different case still. It is closely associated with the caste system, which holds that one’s social position in society is a consequence of acts in previous lives – karma – and is thus justly merited instead of based on arbitrary luck. This involves the idea that improvement of status can only happen through upgrade in a next incarnation, which can be achieved by living virtuously according to the duties associated with one’s caste, occupation, age and gender (sva-dharma). Caste is not primarily a monetary indicator: it does not necessarily overlap with economic class. Yet, this religious framework shapes the twofold attitude towards poverty: Hindus may believe that the unfortunate are themselves responsible for being in that situation, but charity-giving (dana) is very important as it builds up one’s own good karma.

The fact that the caste system is based on a meritocratic principle with criteria that are meaningless to a non-Hindu (i.e. deeds in a past life), leads to an interesting observation. It shows the negative side of the positively-connoted word ‘meritocracy’ as we know it from other contexts (such as the American Dream): as everyone gets what they deserve, not only the winners but also the losers are perceived to have rightly earned their current situation. But if we don’t believe in previous lives, it is impossible to deny that it is mere chance that determines your starting position in society, which of course greatly influences your opportunities for success.

In Islam and Christianity, the ‘why’ of poverty is not as clear as in Hinduism. Why do some have to undergo the test of poverty and some don’t? No one is predestined to be poor, but everything is in the power of God after all. It is a problem many a theodicy has sought to find an answer to: why does God permit so much suffering? Regardless of these questions, we do see that these three religions aim to alleviate poverty and do so by formulating giving to the poor as a win-win situation: sharing your wealth also has promised benefits for yourself. Giving brings you closer to a spiritual goal.

Young Western travelers on what typically should be their coming of age trip through India have often no such a religion to turn to for moral explanation in a postmodern world. (Except of course for the enviable kind of India-traveler who is upon arrival endowed with spiritual truth through yoga and colorful baggy clothes.) All we are left with are ideals of equality and human dignity and a pair of idealist glasses that the experience of life has not yet stripped of its rosy color. To such virgin hearts, India poses harsh questions of global injustice.

Studying in New Delhi robbed the concept of a ‘poor student’ of the meaning it had to me. When I leave the university campus, I see people without shoes laboring for meager amounts of money to get through another day. When I leave the campus on another side, it is for the air-conditioning and wifi of a shopping mall more fancy than the ones I know from Europe. I can allow myself this luxury, although on The Other Side I could eat multiple days for the price of one Starbucks visit. The next day, I find myself bargaining with a tuk-tuk driver again to save the equivalent of €0,14.

The different realities one can enter in New Delhi make it a city of many cities. As any guide book will tell you, this also applies historically. New Delhi is known as the eighth city: at the same place, seven have been built and destroyed before the British constructed the ‘New’ one. Again and again the city reincarnated from its ashes, like the Hindu cycle of death and rebirth. Given the scope of poverty in India, which makes it a problem unlikely to be eradicated soon, this is the main hope of many of the city’s unfortunate: a next life.

The question arises: does the idea that it won’t make a difference exempt you from considering the possibility you have to do at least something? My personal policy has been to give away food if I can. I take my leftover curry (too spicy) in a doggy bag and buy some more apples than I’ll eat. The act of giving does come with a manual, entitled The Anonymous Philanthropist: one best directly walks away because further requests will inevitably follow the one banana, while others in equal need appear from unexpected corners. It might make you feel like the king who doesn’t want to be recognized during his periodical benevolent mingling with his subjects, still every time bewildered by and insufficiently prepared for what is usually invisible.

Christianity, Islam and Hinduism all teach that it is a virtue to renounce material riches. But if life is a test in which you have to demonstrate to be a morally good person, as these religions hold, wealth is probably a greater challenge than poverty. Not only is it difficult to give away what you have, it also puts you in a position of power in which ethical questions become a lot more difficult. As a visitor of India, one is inevitably faced with such challenges. And however we decide to act upon them, more than changing anyone’s life, it changes our own. Reflecting on my almost-tears, I know that they sprang only partly from sadness: it was also happiness that I was not in their situation. The confrontation with poverty should, of course, be at least this: a lesson in gratefulness.

From January until May 2017 I studied at Jawaharlal Nehru University in New Delhi. Read another article about India’s religious plurality here.