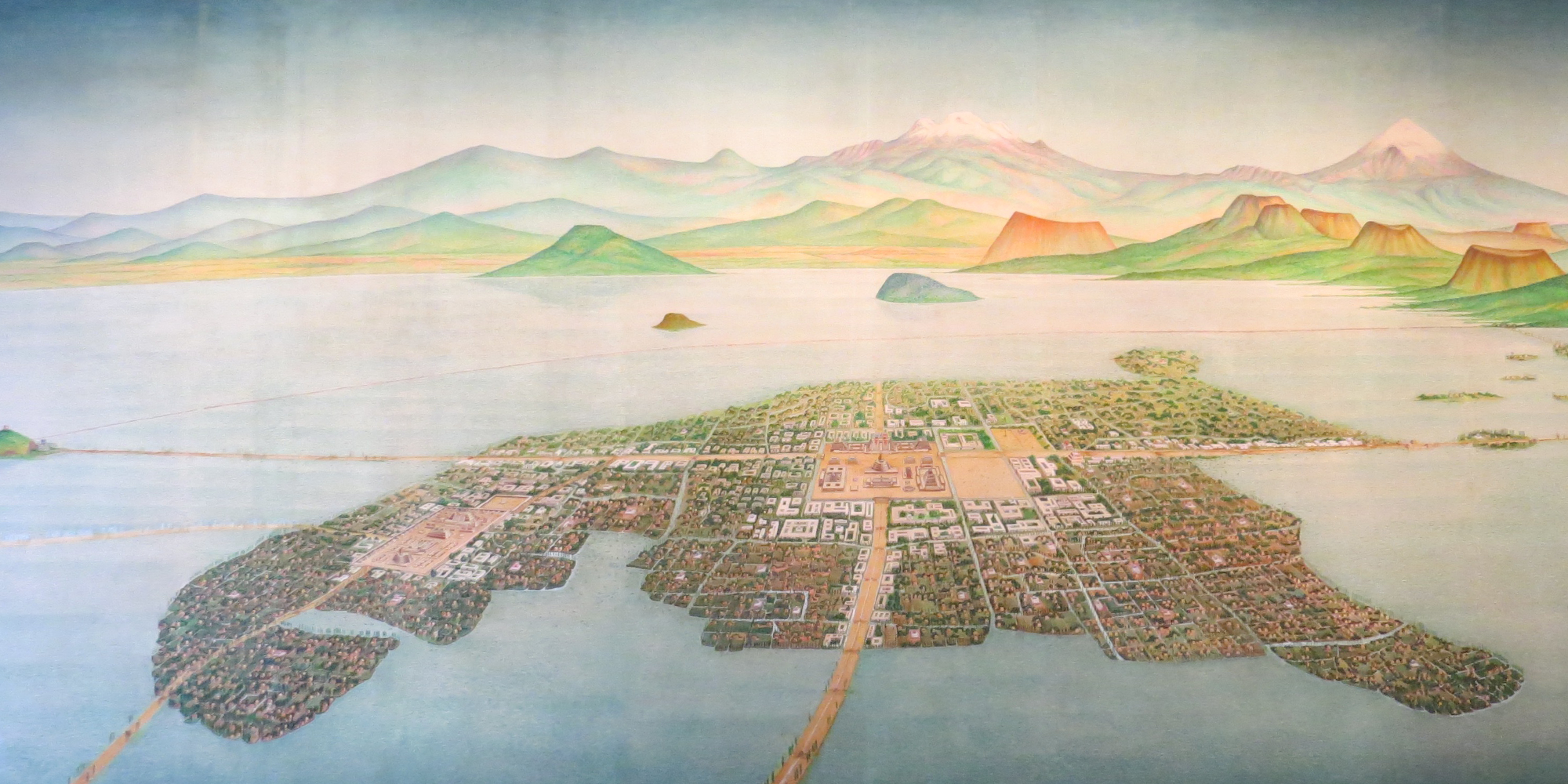 How a lake turned into one of the largest cities in the world: this is the story of Mexico City.

Before the Spanish conquest, Mexico City was a kind of Venice in the middle of a couple of connected lakes, surrounded by volcanoes. It was called Tenochtitlan: ’the place of many tunas’ (notwithstanding the watery environment, a tuna here being the fruit of a cactus).

The city was founded when an eagle landed on top of a cactus and ate a snake. For a group of people called ‘Mexica’ this was a sign they had been in search of for 100 years: their gods had told them that this would be the place to build their city. This story is told on the contemporary Mexican flag.

The Mexica made their city the capital of what we know as the Aztec empire, and it became the biggest city in the Americas – bigger than any European city at the time. Its streets, buildings and marketplaces were connected through an extensive canal system and surrounded by floating gardens where crops were grown.

From the city, one could via a long bridge reach another island, with a temple where an Aztec mother goddess was worshiped. After the Spaniards came, Mary – mother of Jesus – made her apparition on that very spot and requested a church in her honor. That of course left the Spaniards no choice but to destroy the holy buildings of the Aztecs, build cathedrals with the stones and to convert the Indians (as they had called them) to Catholicism.

That reasoning might not hold much water, but it had success. Mexico’s population is today highly religious and the basilica built over the old temple has become the most visited Catholic pilgrimage site in the world.

The depiction of Mexico’s Maria contains characteristics accommodating indigenous religions, referring for example to the concepts of moon years and 52-year cycles. Maria was baptized “Our Lady of Guadalupe”, after a site in Spain where she had also appeared. The probably Arabic etymological origins of that name mean ‘hidden riverbed’ (وادي اللب): a meaning that proved prophetic.

The lake was entirely drained and covered by city. It was the Spaniards’ final affirmation of their previous overcoming of the water to reach the New World. The valley where Mexico City lies in is nicknamed the Valley of the Damned – interpret that however you want.

The original canal system can only still be seen in an area of the city called Xochimilco, in what consequently has become one of the least authentic and most commercialized parts of Mexico City: a plethora of colorful boats occupy the waters, circumventing other floating tourists, musicians and special offers.

Besides that, seemingly nothing reminds of the pre-Hispanic Aztec city except for some street names and an occasional archeological site; nothing reminds of the lake except for the current city steadily sinking centimeters every year into the swampy underground. Sometimes, one of the frequent earthquakes destroys a building and allows for excavation, revealing more of Mexico’s incredible wealth of history.

When Mexico achieved independence from Spain after three centuries, it found itself as an ethnically very diverse nation. A national identity had to be forged that merged the European with the indigenous: the process of cultural synthesis was based on a mestizo character – like the Lady of Guadelupe.

Today, the Mexican government has abandoned any racial categories, saying they simply don’t make sense anymore: most people, especially in the cities, are of mixed heritage. An attempt to make the troubled history water under the bridge.

Mexico is a fascinating place of not just colors, tastes and sunshine, but of fusions and contrasts under the surface. Stilled waters run deep.

The picture is an impression of Tenochtitlan before the Spanish conquest, taken in the National Museum of Anthropology in Mexico City.BewarenBewaren